Discover the Quran translated by Muhammad Muhsin Khan, the notable translator of the Quran, completed along with Muhammad Taqi-ud-Din al-Hilali. Their translation was called “The Noble Quran”. 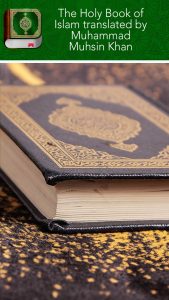 He worked in the Ministry of Health, in Saudi Arabia for 15 years and then he worked as the Director of the Islamic University Clinic, Al-Madinah.

Muhammad Muhsin shared with Dr. Muhammad Taqi-ud-Din Al-Hilali the translation and Interpretation of the Qur’an into English.

The Quran (in Arabic al Qur’an, “recitation”) is the word of Allah, which was revealed to the Prophet Mohamed by the Archangel Gabriel.

With this app, you can read the Holy Quran for free on your mobile at any time of the day.

Now you can read the entire Koran translated into English!